The haunting, bittersweet melodies of LA-based shoegaze veterans Modern Time Machines have been described as a “noisy, romantic hurricane for those who like their rock with intricate layers” (Buzzbands LA). Boy/girl vocal harmonies feature heavily in the band’s feedback-laced love songs, which have drawn comparisons to acts like M83, Medicine and Sonic Youth.

Following the local momentum of their earliest shows, the band’s first single “Dweeb” began receiving strong radio support from LA’s KROQ 106.7FM. Continually refining their sound with “nuanced playing and killer hooks” (Los Angeles Times), the band was invited to perform live nationally on the premiere episode of Adult Swim’s cult TV hit The Eric Andre Show, and their tunes can be heard on the soundtracks of films such as “My Teacher, My Obsession” and “Killer Cove” on Netflix. 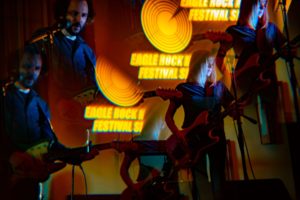